Posted on April 24, 2014 Categories: Meeting With The Lads 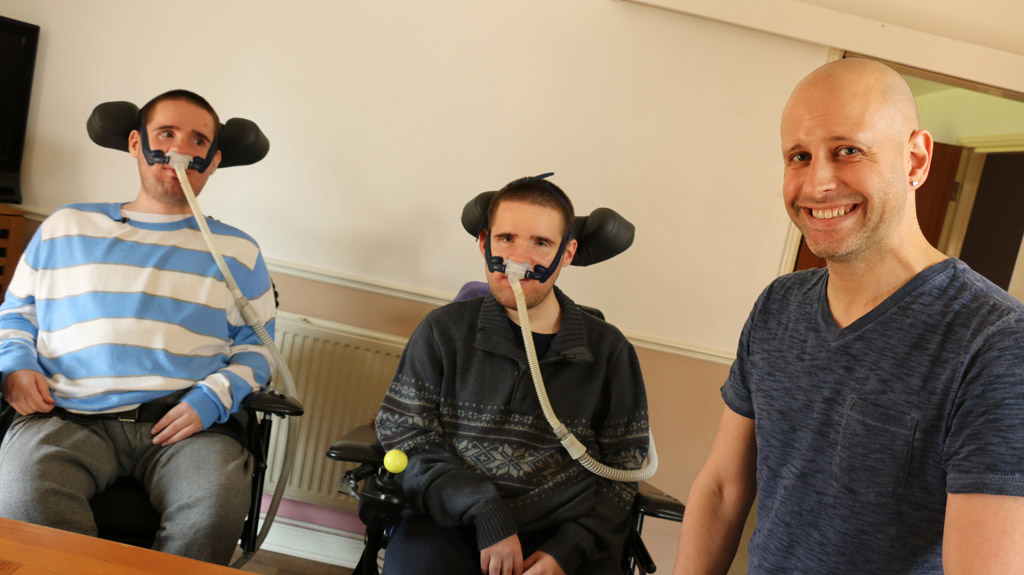 We had a pretty great first day with the Lads. We didn’t get over to their house until about 1pm, Diane said it would be better to skip the morning as the Lads are better a bit later in the day. Sam and I stopped at a “chippy” called Chatties near their house for some fish n’ chips. It’s hard to tell in the pic below, but that’s a full haddock right there. Serious stuff. Mmmmmm.

We met up with the Lads, their family, and their two carers Lucy and Jill. Such warm wonderful people. The house is brimming with life as there are all sorts of animals about. They have a sweet dog (Heidi) that tended to sit on the Lads’ laps, a turtle, geckos, lizards, fish, and a couple more outside dogs as well. My kids would love it.

It took us a little bit to get set up with lights, camera, and the sound equipment. Once we got going, I showed them the microphones and we opened them up. I described how the circuit works inside and showed them the software I use to program the mics. We walked through the various aspects of the DSP program that I put together for them, explained some audio terms like compression/gating, and went through the process of programming & re-programming the mics.

We talked with the Lads and their parents about the state of care in the UK and how it compared with their native Ireland. At various times, one of them would mention how if they had stayed in Ireland, they’d be dead by now. This has to change. There are various organizations there working to improve the conditions for boys suffering with DMD, like Join Our Boys. We had also discussed treatment options that have been developing for DMD for some time. More needs to be done to get information about new drug trials to people outside of the US as they get so little info here and it tends to be too late (just missing age cut-offs, etc).

We programmed the first set of DSP for their mics and closed up the enclosures for use. Tomorrow we’ll get to fitting them on the Lads and fire them up with their new Dragon NaturallySpeaking software to see how dictation is working. We did do a small test today using the built-in transcription functionality on Mac OS X on my laptop. The first sample was amazingly accurate (perfect). Second and third samples were horribly wrong (and kind of hilarious). So there’s some tweaking to be done for sure.

We spent about 6 hours or so with the Lads today and it was a good first day. After leaving them, we set out to find a pub, grab a beer & some food. Sadly, there’s not a lot of food open in the evenings here. We did find a pretty cool kabob shop (see pics). Tomorrow we plan to hook up the mics and try them out with Dragon and Skype. So far so good!!