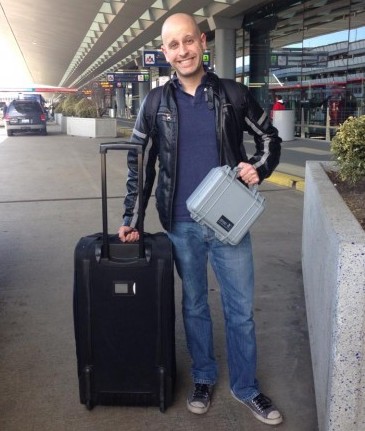 I am currently sitting on the plane flying from Chicago to Manchester, UK. We’re cruising at 29,000ft and have been in the air for about an hour. We should touch down in the UK in about six hours. I’m supposed to sleep, as the flight left at 6pm and gets in at 8am. Then after arriving, I should stay awake all day and sleep at my normal time in the local time. Problem is that I can’t really sleep on planes and I’m just not tired. I mean if you know me, you know I’m always “tired”…but I guess not enough to sleep on a plane. So I’ll write this and finally catch up on some reading (trying to finish “The Golem and The Jinni”, awesome book).

Preparing for the trip this past week has been stressful, with a similar feeling to the week leading up to SingStrong Chicago. Most mornings, I would wake at 4:30am , anxious, with a list of things in my head that need to get done. I’d be afraid to go back to sleep, that I’d forget the list when I woke again. I constantly had the feeling that I was forgetting to do something big that I wouldn’t realize until just before the event, when it would be too late to do anything about.

My packing list was fairly long and I had been preparing it for the past two weeks. I’ve got not only the microphones, electronic equipment for programming/repairing the mics, and tools but I also have all the camera gear & lights for Sam to use for filming everything. Also, this is no normal trip in that I don’t know what exactly we’ll be doing or what we might encounter. Some of that is my own fault for not setting down a list of goals (and anti-goals) for the trip, not establishing a schedule for us, and not communicating more with the Lads beforehand. In my own defense, I don’t know what they are capable of doing (how long of a stretch they can work/hang-out at a time, what their normal waking hours are, and what their schedule is like each day) and it’s been generally difficult to communicate with them since they don’t usually respond to my messages because it is difficult to dictate. Just how it is.

So I guess my goal is to go and see what we can do. Maybe my throat mic will help them, maybe it won’t. Maybe I just leave them with the simple lavalier mics I brought as “Plan B.” Maybe nothing we try works for them. But hey, I’m an engineer. I know that we don’t always get it right the first time. I had many failures along the way developing the Thumper and I’ll continue to have more failures.

I think the time I spend with the Lads in person and learning what exactly does NOT work will be invaluable in helping them and others in their condition. Also, you can’t know what a user of a device will really do with it without doing some sort of true ethnographic study. Watch them interact with the device in their own natural habitat.

I get the feeling from talking with their mother Diane (who has been very sweet to chat with), that the care in Ireland and UK has not been great for them. She has six children, 5 of whom have been afflicted with this disease. The other family I’ve recently learned about, in Ireland, also has three boys (1 older and 2 twins) with DMD. It seems in both family’s cases, the first child was not diagnosed until just after the second child (or twins in both cases) was born. Then they realized that the second will have the disease as well.

My wife Jill had two cousins that both had severe cerebral palsy. I don’t know if there are differing levels of CP but it did seem rather severe to me. Their condition was apparently a genetic one, that was only passed to male children (which is similar to DMD in this respect). They had a sister Hope who did not have the disease. I know how difficult it was for their family to care for the boys and how they built their lives around the boys’ condition. I am curious to see how the care in UK compares to that of the US. I think Diane was hopeful that care in the US was excellent and exemplary. Not for her own needs, as I would think that moving the Lads that distance would be difficult and costly, but just for the other families living with children having diseases such as these.

…So in the end I did fall asleep on the flight for a few hours. It wasn’t a great sleep, but only because my back and neck were killing me (COACH!!) and not because I was anxious with tasks for this trip. I’ve done everything I need to do to get here. Now I can just enjoy the ride and help some lads out.