Posted on April 26, 2014 Categories: Meeting With The Lads 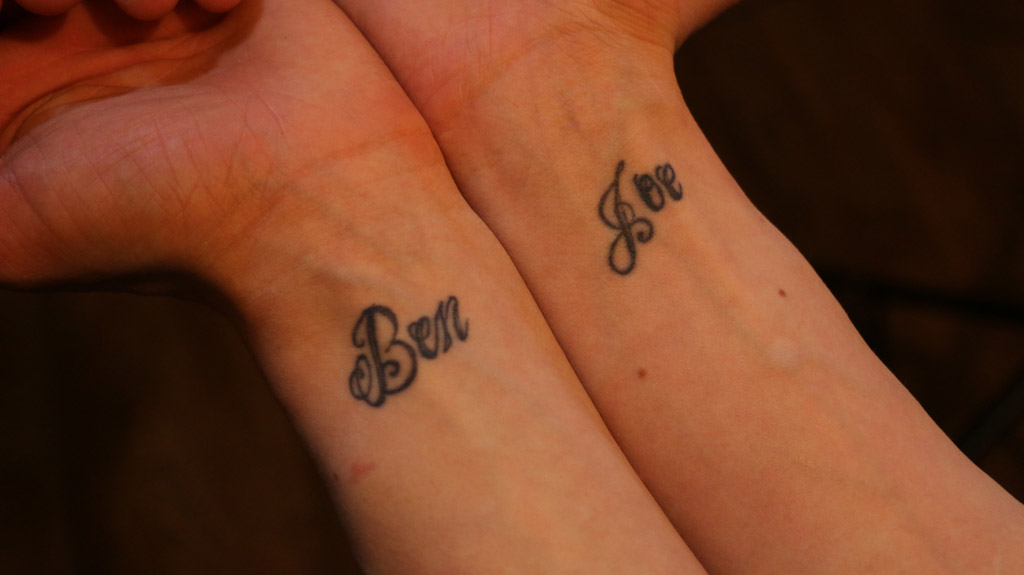 Friday was a big day with the Lads and their family, spending about 10 hours with them. We got there a bit earlier than the previous day to be sure we had time to do everything we needed to get done. The Lads’ brother Sam was with us all day and was a huge help with the Lads as well as helping Sam Nulton with setting up the video equipment and taking shots. Yes, two Sams…got a bit confusing. I’ll use their last names here for clarity.

Jumping in right away, we did a test with Skype to see how well the mics worked for picking up regular conversational speech. We Skyped from each Lads’ computer to my laptop which I carried into the other room. Speech was very clear on Ben’s mic but not as good on Joe’s. I looked at a couple things on the computer and we did another test. That one worked much better. Must have been a bad Skype connection, which could happen with anyone using the regular built-in mic on their computers too.

The Lads have a lot of friends they’d like to Skype with back in Ireland, so this was a pretty important test. With the laptop a couple feet away, they would feel the urge to shout just to be heard. They told us that they usually could do a maximum of 20 minutes of talking this way and then they would tire easily. Joe said that with the throat mics, they really could talk all day.

Next we moved on to Dragon NaturallySpeaking for dictation. This is a more difficult test of the microphone’s ability because it really requires quite a bit of clarity to understand the Lads. We installed the latest version of Dragon on both laptops, which are both running different versions of Windows (7 and 8). This wasn’t too much of a problem but Joe’s laptop running Windows 8 was noticably slower than Ben’s and periodically would sort of freeze while it was processing something. In the end, we got Dragon installed with little issue.

The first problem I did run into was getting Dragon to recognize the Thumper throat mic as the audio input. The app doesn’t give you a list of available inputs to choose from, as Skype gave us earlier. You can tell it to use the built-in mic, USB, or other options. When it listed “USB” it didn’t say the name of the device. So we weren’t sure what was actually going on. The first try with getting input to register from the mics wasn’t working. We checked the Windows Contol Panel, made some adjustments, and that still didn’t seem to do anything. I got a little flustered and took a couple minutes to walk around the house to think. This worked perfectly in Skype, why is it not working now in another application?

I came back in, we unplugged the Thumpers, and started everything over. Replugged the mics, restarted Dragon, and had Joe try speaking the test text. It worked! Sometimes, you just need to restart everything, especially when doing anything with Windows (UGH!).

The next task was to train Dragon for recognizing the Lads’ speech. This can be a long process. The software presents you with a series of sentences to read and as you read, it will interpret what you’re saying and if it understands you correctly, the little arrow will point to the next word. It took some effort and sometimes saying a single word over and over again to get past it (“noisy” was a particular problem for both lads). As they were training the software, Heidi was asleep on Ben’s lap which was really sweet to see.

The Lads were “cookin’” now, reading through their sample texts at the same time. This was a pretty cool test of the mics’ ability to isolate outside noise, since they were both speaking about a foot away from each but were reading different texts at the same time. It was working and that was pretty amazing to see. It wasn’t perfect and I think it did frustrate the Lads a bit, but they are certainly persistent.

I stepped out of the room into the kitchen to let them work with the mics on their own and watch them from afar. That’s when Diane and Sam Styles told me how amazing this was for them to see. Sam spends almost every waking hour of the day with his brothers. They would usually stay in their room all day and not do very much. Since we arrived a couple days ago they been very chatty, smiling more than he’s seen them do in a long time, and opening up to us right away and not staying reserved as they would normally do with new people coming by. He said, “Even if the microphones didn’t work at all for them, just the attention they have gotten from you and you guys coming out here is the biggest thing for them.” This is when I needed to step outside and compose myself a bit. It wound up being a pretty emotional day all around.

Once they completed the training of the software, we tried some dictation into DragonPad. It did not go well. The software seemed to be able to understand them well enough to make it through all the training texts, but once we got to free input, it didn’t get anything right. The software learns their speech over time, so we’re thinking they’re going to need to do more of those training texts with it and more experimenting with DragonPad to get the software to learn their voices.

This wasn’t was I was hoping for, but it’s still a step in the right direction. Skype sounded great, which is very important for them right now. The dictation will be more important for them as they progressively lose the ability to move their hands. Hopefully by then, we’ll have trained the software to work better or I’ll get them improved programs for their throat mics.

We did one-on-one interviews with the family members and the Lads so that we could get their thoughts on video. That too proved to be a bit emotional for us. This family has put their entire lives on hold for many years, just to do whatever they need to do for these twins. They’re not bitter about it, they just do it because that is what you do for your family. They are a beautiful inspiration to me.

Diane cooked us all this amazing dinner of beef stew, potatoes, Yorkshire pudding, dumplings, and an amazing apple tart with custard & cream for dessert. Sam Nulton and I were besides ourselves eating this wonderful food. Sitting with their family at dinner, we felt like we have become part of their family too.

After we left, Sam and I did a little shopping around in Fleetwood and I was able to find some Tic Tacs that I did not have for my collection: Spearmint Twist, Apple Burst (I have Duo de Pommes), and Orange Lime. A great ending to a pretty excellent day with the Lads.